‘Groundwater: making the invisible visible’ is the World Water Day theme for 22 March 2022. In recognition of this, this briefing provides an overview of the state of groundwater in the EU. Groundwater stores almost one third of total global freshwater resources and, in the EU, supplies 65% of drinking water and 25% of water for agricultural irrigation. Groundwater pollution is a serious threat to this resource. Recovery from pollution is not easy, as removing pollutants is difficult, meaning that they can accumulate. Groundwater resources are also under increasing pressure from water abstraction and climate change.

Many ecosystems and economic sectors in Europe depend on the availability of water of sufficient quality. Groundwater provides a safe and sustainable resource to meet demands for drinking, agriculture, industry and tourism. In particular, meeting water demands for drinking and agriculture depends significantly upon groundwater, which accounts for 65% of drinking water and 25% of water for agricultural irrigation. But groundwater is a finite resource that needs to be protected from pollution and over-exploitation, to ensure the long-term sustainability of its use for human activities and natural ecosystems. Groundwater is an integral part of the natural water cycle. Once degraded or depleted, it can take years or decades for groundwater to recover.

In the EU, the Water Framework Directive (EC 2000) requires the management of groundwater bodies with the aim of achieving good chemical and quantitative status.

Reporting under the Water Framework Directive in the second River basin management plan (RBMP) reporting cycle (2016)[1] indicates that 24% of the total groundwater body area in the EU-27 is of poor chemical status and 9% is of poor quantitative status. Combining both chemical and quantitative status assessments shows that 29% of the total groundwater body area lacks sufficient capacity to meet the needs of ecosystems or society, owing to deterioration of either quality or quantity[2].

Agriculture plays an important role in providing food security and makes the EU a global leader in agri-food exports, which amounted to EUR 138 billion in 2018. The total value of this economic sector within the EU was around EUR 405 billion in 2018. Since the Second World War, Europe’s agricultural output has grown considerably, delivering a great diversity of food at affordable prices. However, this has resulted in a deterioration of the quality and quantity of groundwater resources, driven by the increased use of nutrients, chemical pesticides and crop irrigation. These pressures in turn have affected groundwater-dependent aquatic environments and ecosystems, and are being further exacerbated by climate change.

Diffuse pollution from agriculture is the most common pressure causing less-than-good groundwater chemical status, and affects 19% of the total groundwater body area in the EU-27. The most common pollutants reported to have caused failure to achieve good status are nitrates, then pesticides — this reflects reporting requirements under the Water Framework Directive, which stipulates that Member States must report on these categories of pollutants, while reporting on other pollutants is more country dependent.

Groundwater pollution from agriculture is widespread in central and southern Europe (Map 1). Once groundwater becomes polluted, it can take decades to recover: nitrate concentrations in European groundwater have shown little change over almost 30 years. Nitrogen surpluses in agricultural soils, which provide an ongoing source of nitrate to groundwater, are still identified in Czechia, Denmark, Germany, Hungary, Ireland, Italy, the Netherlands, Spain and in large parts of France. Pesticides were found to exceed legal limits at between 3% and 7% of groundwater monitoring sites between 2013 and 2019.

Water abstraction for irrigation and other agricultural activities causes less-than-good groundwater status in almost 7% of the total groundwater body area of the EU-27. Abstraction pressures are mainly found in Greece, France, Hungary, southern Italy and Spain.

Map 1. Diffuse source pollution from agriculture in groundwater bodies in the EU-27 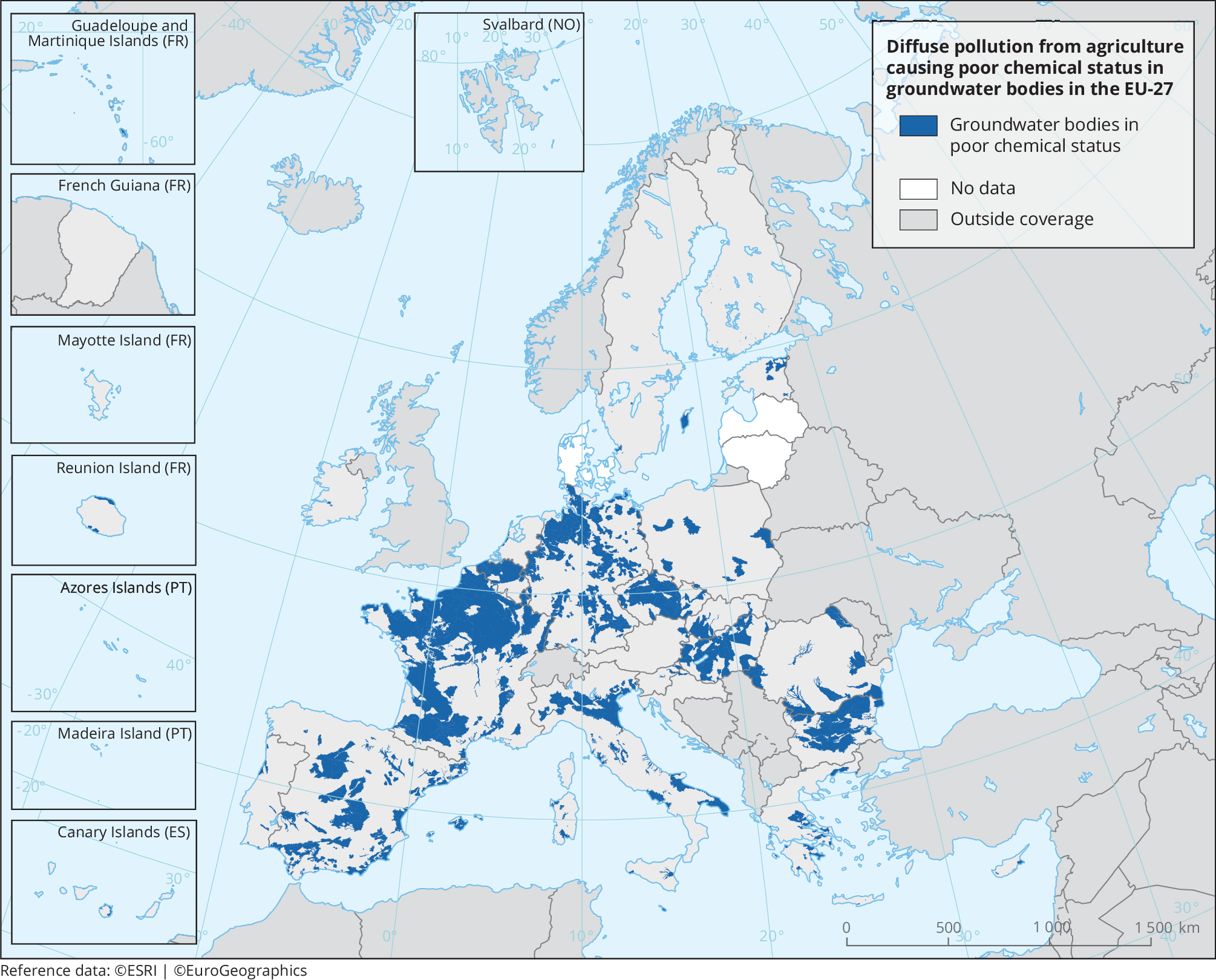 The 27 EU Member States abstracted around 38 billion m3 of groundwater each year between 2010 and 2019, accounting for 65% of total water abstraction for public water supply. A supply of high-quality and sufficient volumes of water to the public is essential for domestic uses such as drinking, food preparation and hygiene.

The pollution of groundwater leads to significant costs for drinking water utility companies. Costs arise from denitrifying water, removing pesticides and blending with cleaner water. Over-abstraction of water from coastal freshwater aquifers may also result in saline intrusion into the underlying seawater. This can make the groundwater unusable for decades and can increase the cost of treatment. At particular risk are the karstic aquifers of the Mediterranean coast, which are extensive in Croatia, Greece, France, Italy, Malta and Spain. These aquifers tend to be under intense pressure from agriculture and drinking water abstraction, due to population growth and tourism.

About 5% of the groundwater body area in the EU-27 in 2016 was reported to be of less-than-good chemical status as a result of point source and diffuse source pollution from abandoned industrial or contaminated sites (EEA 2020).

Pressures from mining activities are less widespread than industrial pressures at the EU-27 level. However, they are particularly significant for certain EU Member States and regions. Almost 3% of the total groundwater body area of the EU-27 is of less-than-good status and is affected by diffuse source pollution from mining (EEA 2020). Large parts of Bulgaria, northern Estonia, northern Germany, Western Macedonia in Greece, western Hungary, central and southern Poland, western Slovakia, and parts of Catalonia and Andalusia (e.g. Rio Tinto) in Spain are among those regions where diffuse pollution from mining was reported to be the main pressure causing less-than-good chemical status in groundwater bodies (Psomas, Bariamis, Roy, et al., 2021).

Climate change may affect groundwater quality, through interdependencies between pollution and over-abstraction. For example, if an aquifer is over-abstracted, the concentrations of nutrients and chemicals may increase, because pollutants will be less diluted. Over-abstraction in water-stressed areas can also cause groundwater pollution if saline or polluted waters are drawn into the aquifer (Cantor, et al., 2018). The rise in average sea level and the increase in storm surges predicted as a result of climate change may lead to coastal groundwater aquifers across the EU-27 being further affected by seawater intrusion (Psomas, Bariamis, Roy, et al., 2021).

Climate change is expected to increase the demand for water for irrigation in Europe (EEA 2021). For example, increasing temperature may allow the expansion of agricultural activities in northern latitudes and, in turn, increase demand for water for irrigation in this region. The integrated management of water demand at river basin level is essential to prevent unsustainable over-abstraction in areas where water stress prevails.

Water stress already affects 20% of the European territory and 30% of the European population on average every year (Map 2), while droughts cause economic damages of up to EUR 9 billion annually and additional, unquantified damage to ecosystems and their services (EEA 2021). 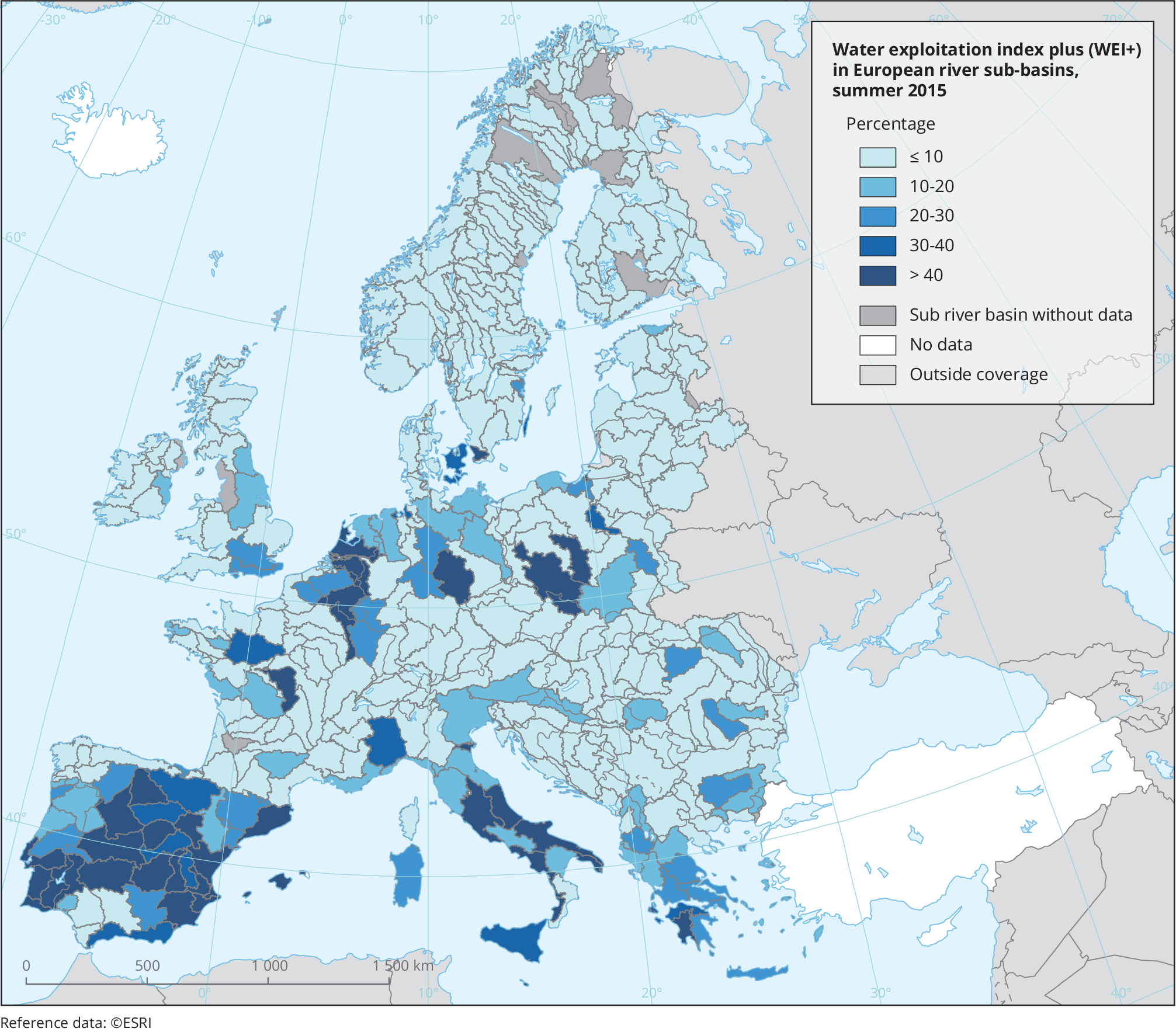 Note: Assessments of the sustainability of water abstraction at the European level remain limited by data availability and the approach to the interpretation of water returns. This may lead to large differences in the European WEI compared with national data sets. An example of this occurs in the south-western sub-basin of France along the Atlantic coast, an important maize production area. There, the national estimate of the WEI is around 50% because it assumes no water returns from agriculture, whereas the European estimate, which is based on a 31% returns ratio from agriculture, is below 10%.
Source: EEA ( 2021).
More info...

Through a range of new strategies and policies, the European Green Deal (EC 2019) has reiterated the need to manage water resources sustainably, and tackle chemical pollution and water stress, to ensure sufficient, good-quality water for the environment and people. The EU biodiversity strategy (EC 2020b) and the climate change adaptation strategy (EC 2021a) emphasise the need to preserve ecological flows and regulate groundwater abstraction. The zero pollution action plan (EC 2021b), farm to fork strategy (EC 2020a), soil thematic strategy (EC 2006)and the revised Urban Waste Water Treatment Directive (EC 1991) should provide additional instruments to manage emissions and pathways of contaminants into groundwater.

The EU environmental policy framework aims to ensure the integrated management of groundwater for human well-being, sustainable development and the protection of natural ecosystems dependent on groundwater. Nevertheless, implementation of policy provisions at river basin level needs to be further accelerated (EEA 2021).

Land use planning should consider risks to groundwater, so that water-intensive activities, e.g. agriculture and urbanisation, are controlled in water-stressed areas. Groundwater quality should be protected by restricting polluting activities in sensitive recharge areas.

The precautionary principle should be applied to national climate change adaptation strategies, because of the risk of irreversible damage to groundwater.

Tackling the main pressures affecting groundwater status will require the development of new approaches, the use of information technology tools such as digitalisation in groundwater monitoring and new financing tools, and the enforcement of efficient implementation and circularity in the use of groundwater. More focus is required on reducing the pressures originating from agriculture and public water supply.