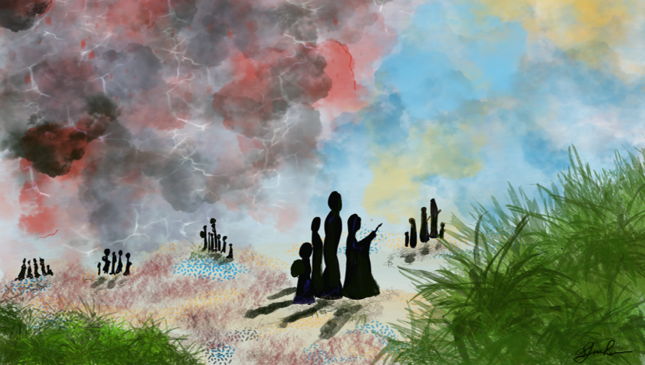 Almost two years after Cyclone Idai hit Mozambique, Zimbabwe, and Malawi, thousands of people remain displaced. At the time, Idai was the most powerful cyclone to hit the Southern Hemisphere in two decades, but it is no longer an anomaly. Worse, the Word Bank reports that climate change can potentially wipe out decades of social and economic progress in the developing world by displacing millions of people, many of whom will be pushed into poverty. Food and water insecurity connected to climate hazards—particularly in places dependent on agriculture—is a major factor which has forced families and whole communities to relocate for safety and subsistence.

How do we solve the problem of climate-induced population displacement within the larger context of the global climate crisis? Across Africa, action on displacement is focused on rebuilding food security, water systems, and livelihoods decimated by the changing climate. Efforts have also sought to bolster ecological systems in response to environmental changes which occur over time (like desertification and sea-level rise) and which threaten the continent.

Climate-smart agricultural practices—managing crops, livestock, forests, and fisheries in a way that addresses interlinked challenges of climate change—along with climate adaptation policies have been crucial to securing food systems in Africa. For instance, regional collaborative initiatives like the West Africa Agricultural Productivity Program have funded agricultural research and innovation to help develop varieties of staple crops which can grow in drought conditions. Since implementation began in 2008, the World Bank reports that the program has improved food security for about 50 million people across West Africa.

In my research, I’ve found that by transforming agricultural systems to support food security under the new conditions of climate change, climate-smart agriculture may help reduce the likelihood of population displacement due to food shortages or loss of economic security, particularly in agriculture-dependent rural communities.

At the local and community levels, government led and private sector supported climate-smart seed programs have been used in several African countries to improve crop quality and production. Examples can be found in Ethiopia, Kenya, Tanzania, and Uganda, where rural farmers have been provided with seed varieties (especially for commercial crops like coffee or staple crops like beans) which are enriched with nutrients or which can more effectively withstand drought. These programs have been vital in increasing availability and access to food, as well as securing economic livelihoods adversely affected by extreme weather events associated with climate change. 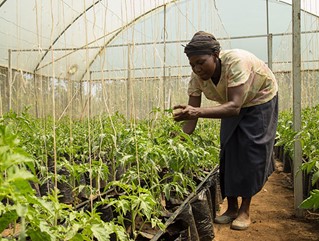 Climate change is significantly reducing availability and access to water, particularly in arid regions. Water bodies like lakes, rivers, and ponds are vital to African economies. Many of these water bodies have historically been the source for household use and agriculture (subsistence and commercial). The waters support fishing, crop irrigation, and agro-processing industries which provide employment. Significant net water loss across landscapes dependent of these sources of water therefore resonates from the household to macro-economic levels. The ongoing situation in the Lake Chad Basin is a prime example of climate change impacting water resources, contributing to economic instability and ultimately population displacement.

In its 5th Assessment Report, the Intergovernmental Panel on Climate Change highlighted the increasing role of climate change in driving internal displacement among the largely farming communities residing in the Lake’s basin region. Over 30 million people in bordering Nigeria, Chad, Cameroon, and Niger have been adversely impacted. Water stress in the lake reduces its fish stock and aquatic resources. Thousands of fishermen and farmers have become unemployed following the downturn in the fisheries sector and associated economic activities. The loss of household income for families that relied on the lake factor into their decision to relocate in search of better economic prospects.

In response to growing water shortages, water security projects are being implemented across the African continent at all levels. These range from short-term community projects (like digging water wells) to long-term cross-continental projects. For instance, the Nairobi Sanitation Project was established to restore water quality and supply to parts of Kenya’s highly populated capital. The Upper Tana-Nairobi Water Fund is another impressive adaptive governance program which is helping to counter water insecurity by filling financial resource gaps, conducting ecosystem rehabilitation, and managing the Tana River’s water resources.

At the continental scale, the Great Green Wall initiative is the world’s latest and most ambitious climate solution project being implemented. The project aims to increase biomass on 10.5 million hectares of land across the Sahel through planting climate-resistant vegetation. When complete, the Great Green Wall is expected to significantly increase rain fall and reduce drought. The project aims to contribute to mitigating long-term climate risks posed by accelerated desertification across Africa’s vast northern terrain. This is important because, according to the United Nations High Commissioner for Refugees, the region now has over 2 million internally displaced people.

As the effects of climate change are increasingly being felt around the world, these and other climate solutions will likely become increasingly valuable. However, it is critical to give more attention to expanding food and water security in response to climate-induced population displacement. When doing so, reducing social inequities in water infrastructure and distribution will be essential. Rural and agriculture-dependent communities as well as densely populated, poorly resourced urban centers need to be prioritized in the design, distribution, and management of food and water systems. Often these communities are forgotten in planning but are at the brink of mass displacement and significant livelihood losses due to structural inequalities and climate-related risks.

Building more resilient and sustainable food and water systems across Africa and other regions experiencing similar climate challenges will depend on timely information. So, another area for growth is improving data quality and monitoring systems. We depend on technology to collect, track, and analyze data on people’s food and water needs, as well other factors linked to displacement.

The African Union and United Nations Framework to Combat Climate Change’s Task Force on Displacement are each already implementing regional and global plans to expand data gathering capabilities on climate science and socio-ecological impacts. Mitigating climate-induced population displacement across the African continent requires us to be effective in implementing these and other food and water security solutions.

Christopher Graham (PhD, Global Governance and Human Security) is a Research Fellow at the Center for Peace, Democracy and Development at the University of Massachusetts Boston. His research focuses on the socio-ecological dimensions of climate change, including climate displacement, environmental migration, and adaptive governance, security and policy solutions.