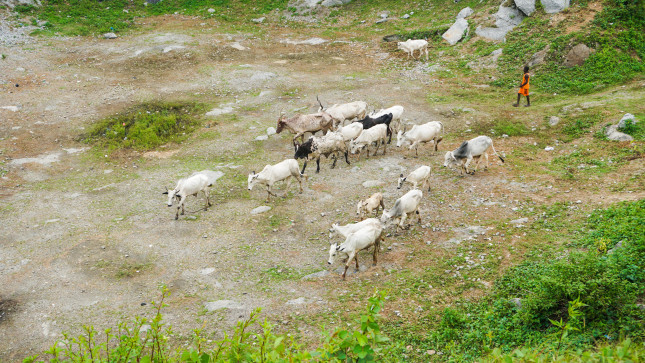 International attention often focuses on ethnic conflict in the Niger Delta and religious conflict in Northern Nigeria, leaving farmer-herdsmen overlooked. In Nigeria, the conflict between farmers and herders has posed severe security challenges and has claimed far more lives than the Boko Haram insurgency. The conflict has threatened the country’s security, undermined national stability and unity, killed and displaced hundreds of thousands of people, and increased ethnic, regional, and religious polarization.

Farmer-herder relationships are simultaneously conflicting and complementary. Their complex relationships have always been anchored between coexistence and cooperation on the one hand, and competition and conflict on the other hand. Unfortunately, the increasing stress placed on shared natural resources—namely fresh water and land as a result of climate change—have further strained the relationships between the farmers and herders.

Farmers and herders, also called ‘pastoralists,” have cohabited for decades. Many pastoral and farming settlements developed symbiotic relationships through reciprocity, economic exchanges, and support. However, with decreasing economic cooperation as a result decreasing availability of, and access to shared resources, their relationship is progressively characterized by violent conflicts.

States in the western parts of Nigeria have been facing increasing violence. In 2018, over 1,300 Nigerians died in violence involving herders and farmers. What were once spontaneous attacks have become premeditated campaigns with marauders taking villages by surprise at night.

Pastoralists have been migratory for centuries, so why the spike in violence in recent years?

To answer that question, we must unpack the complex interactions between the changing nature of access to land in the region as a result of climate change, a rapidly rising population, the influence of elites on herders, and the undermining of traditional approaches to managing the herder-farmer relationship.

The principal driver of conflicts between farmers and herders is economic in nature, with land-related issues at the center, especially issues of accessibility and use of land and water resources. Since the Sahelian drought of the 1970s and 1980s, increased migration of herders into the humid forest zone of West Africa has caused a massive increase in the frequency of farmer-herder conflict. Land and water resources are under increasing stress due to climate change, leading to fierce competition and violent conflict over their use. While climate change was not a precursor to the migration of herders to the southern part of Nigeria, it has increased their migration to southern forest zone, from areas with increased frequency of drought and lower availability of natural resources into new havens with better resources for their livestock.

Constant migration from arid Sahel areas into humid forest zones have caused clashes with farmers who complain that the herders do not stick to the uncultivated areas, destroying their crops and livelihoods. 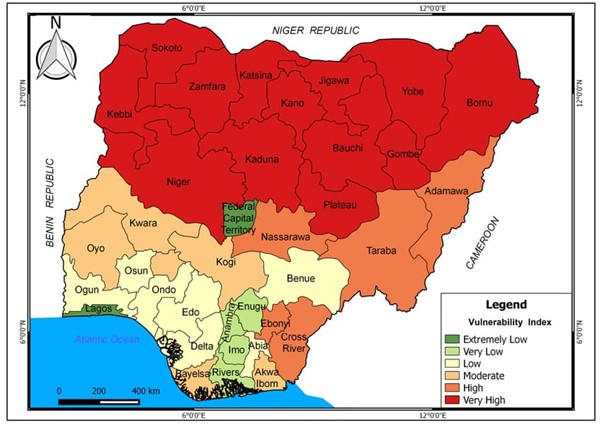 The map above showing the patterns of climate change vulnerability in Nigeria explains the migratory patterns of herders who are moving from high-risk, vulnerable geographical spaces to low-risk spaces further south.

Rapidly rising population in the region is also putting pressure on farmers to increase food production. They have begun to use lands that are traditionally pasture paths for cattle—locally known as the burti system. Under this traditional system, the pastoralist Fulbe tribe was given tracts of land, linked together in a pattern of migratory routes, to feed their cattle in a way that eased tensions between herders and farmers. Old Nigerian maps once had these tracts delineated for cattle migrations.  As population growth continues, farmers are encroaching into these lands for pasture, forcing the herders to crush crops cultivated by farmers, further amplifying tensions.

In addition to climate-related conflict issues, socio-economic dynamics are exacerbating the conflict. A neo-pastoralist practice where herders are armed by their employers with military standard combat firearms or are accompanied by militants has led to increased perceptions by community members of herders as terrorists or agents for Boko Haram insurgency.

Through this proliferation of government elites’ participation in cattle rearing as a business venture, elites increase tensions by feeding into the over-simplifications of the Boko-Haram/Fulani Herder hegemony. They then enable the violence by militarizing the groups they hire to drive livestock, increasing the level of hostility between community members and herders seeking access to land for grazing.

This difference in the perception by herders and farmers of the social value and use of land has also defined their social relation of competition and conflict. Changing patterns of land reforms has increased the competitive demands for land between the owners of land (farmers), and the “landless” (herders). Farmers see land as their property right and must preserve what belongs to them. Herders, on the other hand, see land as an open space where the resources on it can be—and must be—used to feed their livestock. Thus, herders encroach into land which is allocated to farmers.

On average, over 409,700 hectares of forest are lost per year in Nigeria. This deforestation will contribute to a rapidly increasing evaporation rate and decreasing aggregate rainfall amount. This will in turn lead to a warmer weather in the tropics and added stress on water sources for livestock and the people whose livelihoods depend on them—feeding a dangerous feedback loop between environmental change and access to land for both herders and farmers.

A study published in the Journal of Cleaner Production has theorized that increased conflicts between crop farmers and herders in Nigeria could spill over into other countries if the competition for climate change-induced scarcity of resources is not addressed. The study says that activities such as burning vegetation, deforestation, and livestock over-grazing have led to increased carbon emission, leading to negative effects on rainfall and water access for livestock.

Adding to increasing tensions is the tightening of border security by Benin Republic, an ECOWAS member state that shares a border with Nigeria. To protect its sovereignty, Benin Republic has tightened its borders and declared cross-border grazing to be illegal. This renders migration across borders by pastoralists illegal and increases the vulnerability of pastoralists to harassment, racketeering, and other kinds of abuse. Because there is no way to enter Benin legally, herders like those in Nigeria must fight for resources within their state or risk the dangers of illegally being in Benin.

Climate change is a threat to global and regional security. New initiatives to combat or adapt to climate change are proposed daily. One of these is the Great Green Wall Initiative of the African Union. The initiative is to grow trees and other plants cutting across over 20 countries in Africa as an attempt to push back the Sahara and create fertile land in the Northern region. The initiative seeks to create a revitalized ecosystem able to serve as a haven for herders and farmers alike in the northern region.

This Great Green Wall initiative is a sign of international actors’ influence on member states. Though it is not an immediate solution, it is a long-lasting and sustainable one. It strikes at the head of the snake, which is climate change, though it may create conditions for positive effects on peace between farmers and herders in the region.

Researchers sponsored by international actors need to collectively plan and identify ways to deal with climate change, especially as it is affecting the economy of individual states. Since the nexus between climate change and the farmers-herders conflict in Africa is underexplored, researchers need to invest more in understanding the underlying causes, effects, challenges, and opportunities with a view to proffering a long-lasting solution to the age-long conflict.

Ojemire B. Daniel is a PhD student in the Global Governance and Human Security program at the University of Massachusetts Boston. His research interest includes Conflict Resolution, Natural Resources and Violent Conflicts in Africa, and Human Security.

Photo Credit: Aerial view of a Fulani herder boy with his cattle, courtesy of Tayvay, shutterstock.com.

What are the big polluters doing to cut carbon emissions?

SUMMARY PROGRESS UPDATE 2021 – SDG 6 – WATER AND SANITATION FOR ALL