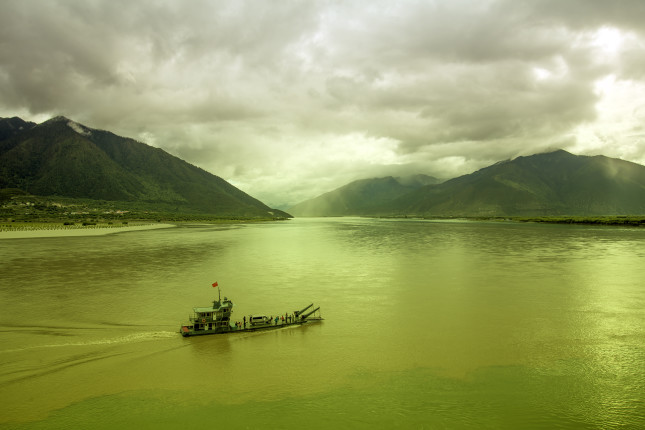 People’s lives and livelihoods are at stake if China does not cooperate with its regional neighbors over downstream effects of the Tibetan plateau’s glaciers. The Hindu Kush Himalayas’ (HKH) numerous glaciers are known as the “Water Towers of Asia” and the “Third Pole.” Over 1.9 billion people depend on water systems that stem from HKH glaciers. Climate change will fundamentally alter the hydrology of the water basins—killing or displacing thousands of people as the changes unfold. Asia cannot continue with national or bilateral plans being the primary climate change adaptation strategies: basin-wide cooperation is essential. Unfortunately, conflicts and simmering disputes in the region make this a staggering goal to achieve.

Regional Importance of the HKH Glaciers

Ten major Asian rivers originate from the HKH glaciers, including the Brahmaputra, Ganges, Indus, and Mekong. Glacial and snow meltwaters from the Tibetan plateau are critical to the basins.

The volume of meltwaters to the Indus, Ganges, and Brahmaputra are substantial—especially at higher elevations. For instance, HKH meltwaters form over 60 percent of the Upper Indus and between 41 to 63 percent of the total Indus system. Approximately 13 percent of the total Brahmaputra River (known in China as the Yarlung Zangbo River) comes from meltwaters. China has a wider share of the Brahmaputra Basin area than either India or Bangladesh combined, including its origin. The volume of Ganges’ meltwater from the HKH is similar to the Brahmaputra, though it receives nearly twice as much rainfall downriver. Relative to these South Asian rivers, HKH meltwater is less important to the Mekong and others flowing southeast.

Climate Change is Altering the Hydrology and Seasonality

For centuries, the HKH glaciers and snowcapped mountains have served as natural storage facilities that steadily release the water year-round. Although the bulk of water flows during the Monsoon season, meltwaters have sustained the region during dry seasons. Climate change, however, threatens to undermine these hydrological processes.

One third of the HKH glaciers will melt by 2100. The Indus, Ganges, and Brahmaputra’s glaciers will each shrink by at least 20 percent—up to 45 percent for the latter two. Climate change is also altering precipitation patterns. Historic snowfall will convert to rainfall, heightening the risk of flash floods. Increased flooding combined with shrinking glaciers will trigger fundamental changes to the hydrology and seasonality of the river systems.

First, precipitation changes will cause rain to start surging downstream as soon as it falls, thereby contributing to more frequent flooding in the spring and increased drought in the summer. Essentially, this change will lead to a “longer and more erratic” Monsoon season.

Second, because the glaciers are simultaneously shrinking, total water volume will change over time. In the short-term, the amount of water is projected to rise, contributing to floods. The Upper Ganges, Brahmaputra, and Mekong are each expected to increase total runoff by up to 27 percent. These increases will not be sustained. Long-term, as the glaciers melt without being replenished to historic sizes, their contribution to rivers and critical role in groundwater recharge will decrease, with major groundwater reductions. Water availability will decrease from 2050 onwards in most of the rivers.

Short-term advantages of higher water volume thus come at the cost of increased flooding events and the longer-term expense of depleted surface- and groundwater reserves throughout Asia.

Lives and Livelihoods at Stake

Directly and indirectly, rivers that flow from the HKH support the nutrition, health, energy, and livelihoods of millions of people. Climate-related disasters negatively impact each of these sectors, and pose significant humanitarian consequences.

Annually, floods, droughts, and other climate-related events kill thousands and displace millions of people downstream of the HKH. Globally, approximately 96 percent of people affected by floods are in Asia. The change in precipitation type from snow to rain will likely be deadly for the over 210 million often marginalized, vulnerable people living in the mountains. Glacial lake outburst floods, change in precipitation type from snow to rain, and increased variability to other water-related disasters will put nearly 210 million people at risk, including many marginalized communities situated in the mountainous region.

These hydrologic changes will have major, long-term livelihood impacts—most notably in the agricultural sector. With earlier Monsoon onset times, floods may wash out seeds before they grow and will be less effective at transporting soil nutrients to farms. Additionally, increased droughts in the summer—when downstream farmers irrigate crops—will yield less surface-water at the right time in the agricultural calendar and less groundwater over time.

Water has had significant peace and conflict implications regionally and within Afghanistan and Myanmar—even more now with Taliban controlling Afghanistan and Myanmar’s military in power. Bhutan and Nepal’s mountainous geography and Bangladesh being a delta nation make them each extremely vulnerable to water-related disasters which are complicated by actions upstream. India’s position upstream and downstream causes multiple tensions: India blames China for exacerbating water stress through unilateral water infrastructure projects in the HKH, just as Bangladesh and Pakistan blame India for worsening floods and droughts with similar projects on the same rivers. Pakistan uniquely relies on the Indus, for which the HKH glaciers have functioned as a natural water storage facility since Pakistan has storage capacity for only 30 days of its water needs.

Location, maintenance, and durability of infrastructure are key elements to consider in infrastructure planning. If projects cause hydrological disruption or are not constructed durably, they will be ineffective. If water management agencies lack hydrological data or uncooperatively withholds transboundary water information, infrastructure can contribute to flooding or increase the severity of drought.

There are many instances indicating these factors are overlooked in water and infrastructure management for HKH’s rivers. For instance, China does not share year-round data for most of its transboundary rivers (it only recently agreed to share year-round information for the Mekong). Further, although information on the Brahmaputra is shared, flood gauges are too far upriver to be effective early flood warning mechanisms for downstream populations in India. For its own economic advantage, China has released water in the Mekong. Evidence suggests this action has caused flooding and drought downstream—contributing to mistrust between China and its South Asian neighbors. In 2000, for example, a dam accidentally burst in Tibet. The resulting floods severely affected downstream communities in India, in part due to the fact that the affected populations in India were not aware of the flood surging downstream until it was nearly upon them.

Water in South Asia is a national security issue. “China considers water management data to be a state secret,” says Brian Eyler and Courtney Weatherby of the Stimson Center, as is the case in most South Asian nations. China’s upriver advantage of the Water Towers is one source of tension between China and its South Asian neighbors—India and Bangladesh in particular. Indo-Bangladesh water geopolitics are simmering with a “cold war” over the Brahmaputra’s tributary Teesta and several other controversial infrastructure projects throughout the Ganges-Brahmaputra-Meghna Basin. Nepal and Bhutan’s transboundary water relationships are also growing more tense with their neighbors as the number of water-related disasters escalate.

Pakistan and Afghanistan’s transboundary water situations are each particularly complex. Implementation remains strained for the Indus Treaty, with border disputes intensifying the Indo-Pakistani relationship. Pakistan’s strong relationship with China and the China-Pakistan Economic Corridor might grant it leverage vis-à-vis India. However, most of Pakistan’s waters flow from Afghanistan. Their water relationship under a Taliban-controlled Afghanistan will be fraught for both nations.

The Afghan government had increased domestic capacity for water management, a necessary precursor to implement any transboundary agreement. The danger of losing these gains under Taliban rule is detrimental for Afghans and the region more broadly. To the extent Afghanistan is able to be involved in transboundary water issues, governments will face extra complications to avoid further legitimizing the Taliban.

Despite the geopolitical hurdles, transboundary water cooperation is essential. National or bilateral infrastructure projects are insufficient for the massive undertaking of adapting to the impacts of climate change on the region.

Even if each nation could conduct infrastructure projects which unilaterally manage the water in ways that mimic the HKH’s historic flows, it would be piecemeal and counterproductive. China and the rest of the region cannot afford to delay multilateral water cooperation when a dispute arises in or outside of the water sector. China must elevate its role in existing multilateral efforts from mere observer status and be part of creating basin-wide mechanisms in basins which have none.

The scale of the problem requires basin-wide climate change adaptation, to protect populations initially from flooding events and long-term from declines in water availability.

Given the simmering geopolitics and hydrological complexity involved, the most appropriate trust-building and practical step toward basin-wide cooperation would be year-round data-sharing, joint monitoring assessments, and jointly commissioned modeling research, such as initiatives designed by technical Working Groups of the Water Convention. Since the hydrology and seasonality of the rivers are rapidly changing, governments must soon transition to collaboratively planning climate change resilience measures. Governments should explore benefit sharing initiatives (rather than strictly water sharing) and find ways to adapt through inter-sectoral linkages such as the Water-Food-Energy-Ecosystem Nexus approach.

Transboundary cooperation—from source to sea, mountain to delta—is the only way for the region to holistically adapt to climate change.

Jill Baggerman works on peacebuilding, the environment, and inclusiveness. She is currently a Research Analyst at the United States Institute of Peace and an editor for New Security Beat.

Photo Credit: The junction of two rivers in China, Tibet, “the Brahmaputra and Nyang,” courtesy of LIUSHENGFILM/Shutterstock.com.

Sustainable farming: There’s no one solution

The Failed Europeanisation of Carbon Capture and Storage (CCS)