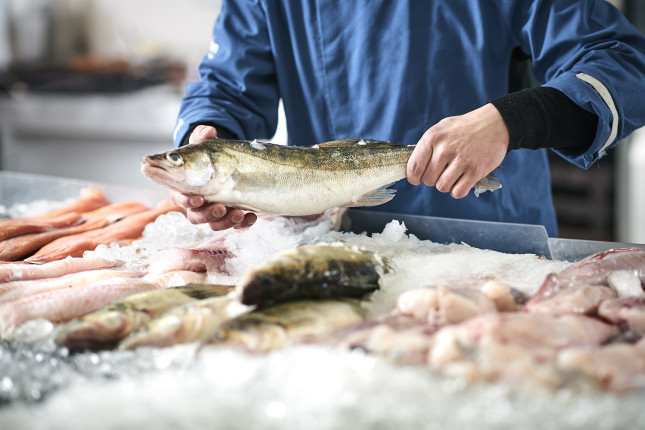 In May 2009, I was traveling with researchers from the Shandong Academy of Agricultural Sciences to learn about rural water pollution. One of them realized it was Mother’s Day and decided to treat the 3 mothers in the group to a fishing trip. We soon pulled into a farm with rows of large concrete ponds filled with fish. This was my first introduction to the world’s largest aquaculture industry, where fish are farmed in ponds, reservoirs, and even rice paddies. China produces 50 million tons of seafood annually, far eclipsing the 0.5 million tons farmed in the United States.

Three drivers are boosting China’s aquaculture production, which has grown 16-fold since 1980. First is the leveling off of wild fish harvest. Second, annual per capita fish consumption doubled between 1980 and 2015. China’s current annual consumption of 30 to 36 kg per person (66-79 pounds) is four to five times greater than seafood consumption in the United States. Third, these impacts are reinforced by the Chinese government’s priority on aquaculture and high seas fishing to meet growing consumer demand, generate domestic jobs, and alleviate poverty.

China is the world’s leading seafood producer and exporter, contributing 62 percent of global production. China has more than 8 million hectares of ponds, a land area large enough to completely blanket the state of South Carolina. These ponds produce fish, shrimp, frogs, and turtles for food, but they also produce plastic waste. Aquaculture, like most agriculture, uses plastics because they are lightweight, durable, and do not rust. In China and beyond, plastic is used in every production stage and as the industry is growing so is the volume of plastic.

The Shandong fish farm I visited was an inland pond system. Other types of aquaculture systems include ocean or lake containment systems that use pens and cages, longline systems attached to buoys to grow shellfish and high intensity, indoor tank systems. It is easy to imagine how plastic nets, cages, and Styrofoam (EPS) buoys used in ocean and lake aquaculture can be lost and drift downstream to become part of the swarms of ghost fishing gear littering the ocean. However, these instances remain in the minority as the vast majority of aquacultural production occurs in inland ponds. 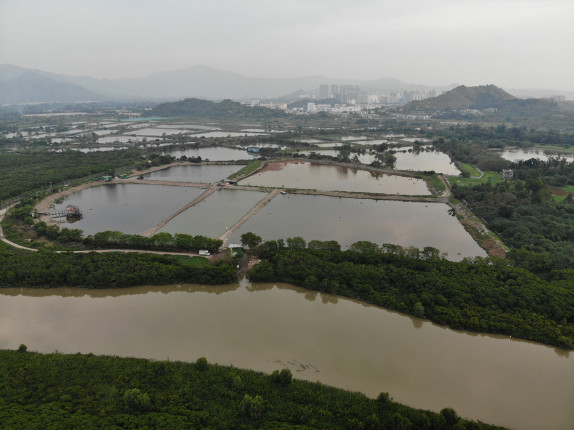 Thirty-five different plastic materials are used in aquaculture, including nets, feed bags, pond liners, piping, insulated boxes and buckets. Annually, an estimated 1.2 billion plastic feed bags are used in China and across Asia. Equipment loss and damage caused by storms is a major source of plastic pollution. Plastic easily washes away since most pond systems are near their ocean, lakes, or stream water source.

Plastic pond liners only last 5 to 10 years and require significant labor and equipment to remove and properly dispose. Because of high decommissioning costs, abandoned seafood farms are a large source of waste plastic. Over 250,000 hectares of shrimp farms have shut down worldwide, leaving behind large plastic items, like pond liners, and making them subject to vandalism and decay.

Probiotics were introduced as a feed additive and tested in Asian shrimp farms in the 1990s to reduce antibiotic use. However, in a discussion with Han Han, founder and CEO of China Blue Sustainability Institute, she pointed out that these small plastic probiotic containers are now a big source of plastic waste.

The Aquaculture Stewardship Council (ASC), an independent, international organization, is working to minimize the environmental and social impacts in the industry through its certification and labelling programs. Aquacultural operations wishing to gain ASC certification must record plastic use and disposal, implement a monitoring program, and wherever possible, recycle and reuse plastic materials. In 2012, ASC started working with Chinese tilapia growers. The ASC logo was introduced into Chinese grocery stores in 2016. By 2018, 11 Chinese seafood companies were ASC certified. One of the companies, Green Life Foods, replaced their fragile polystyrene foam rafts with sturdy PVC, reducing two tons of plastic waste per year.

Because aquacultural plastic may contain chemical additives or are covered with slime they are difficult to recycle. However, a company in Chile, Greenspot, is recycling buoys, floats, and containers used in aquaculture. In Mexico, a shrimp feed manufacturer, VIMIFOS, collects and recycles polypropylene feed bags.

Although China has no specific plastic waste regulations on aquaculture, promising signs of action are emerging. The 13th Five-year Plan on Development of National Fisheries stressed sustainable fish farming and the government has made efforts to prevent pollution and professionalize the sector. The 2019 Chinese Ministry of Agriculture document, “Options on the Acceleration of Green Development of Aquaculture,” adopts a focus on income diversification and rural revitalization. As aquaculture is a major jobs creator in rural China, tensions remain between economic development and sustainability goals. Nonetheless, regulations prioritizing water pollution and waste reduction open up the possibility of future action on plastic waste from the aquaculture industry.

U.S. aquaculture is overseen by over a dozen federal agencies and 1,200 state laws all restrict or control aquacultural operations. Surprisingly, plastic waste is not regulated. Hawaii has the only ASC certified aquaculture operation in the country. Already heavily regulated, U.S. growers look to consumer demand to close the loop on aquaculture plastic. If major buyers, like a Walmart or McDonalds looked for certification, the industry would respond.

The United States has 2,932 aquaculture farms and have sited or scaled their production to minimize the need for plastic says Matt Smith, Ohio State University Aquaculture Specialist. Most production occurs in the southeast where the climate and soils are well suited to pond aquaculture with little need for pond liners. Also, most farms are sized to handle fish and feed in bulk, minimizing plastic waste.

A Needed Demand for Change

Chinese government policies could mandate stronger regulations to control aquaculture plastic pollution, but enforcement across China’s vast aquaculture systems would be challenging. Ultimately, domestic and international consumer demand for more sustainable aquaculture could be a better driver for change.

A recent article in Nature argued that voluntary labelling and farm certification is setting new norms for sustainable aquaculture. Besides certifying aquaculture ponds, eco labels like the ASC logo are even being used by restaurants and caterers to inform their customers of the sustainability of their farmed seafood. Since the U.S. imports so much Chinese seafood, consumers in both countries can demand certified farmed-fish to reward growers that are doing the right thing. 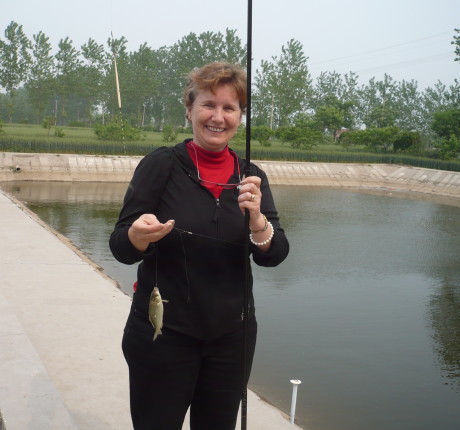 Photo Credit: Karen Mancl holding a fish and fishing rod in a fish farm in Shandong, China, courtesy of the author, Karen Mancl