Higher economic growth in Africa could lead to more energy use, especially in industry 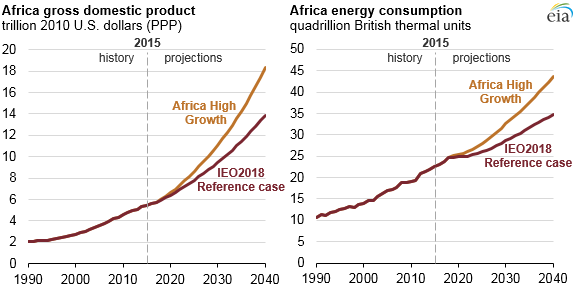 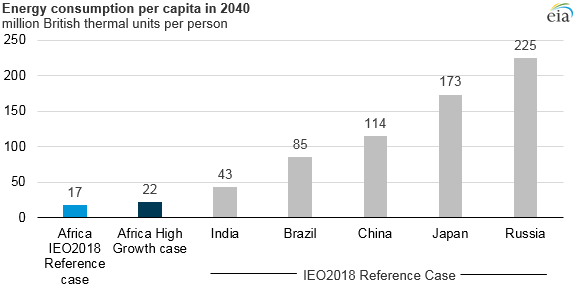 Source: U.S. Energy Information Administration, International Energy Outlook 2018
Although energy consumption per capita in 2040 in the Africa High Growth case is 25% higher than it is in the IEO2018 Reference case, the African value is still lower than in many countries. African energy consumption per capita in 2040 is projected to be one-half of the level in India, one-fourth of the level in Brazil, and one-tenth of the level in Russia in the IEO2018 Africa High Growth case. The net effect of the Africa High Growth case on the rest of the world, because of trade and global supply chains, shows limited impacts on other countries—either positive or negative—in terms of output. The biggest effect is on nonenergy-intensive manufacturing in Eurasian countries, where output is 3% lower in the Africa High Growth case. This slight drop occurs because Africa’s availability of low-cost labor gives it a competitive advantage in manufacturing. Principal contributors: Vipin Arora, Ilan Gmach, George Pantazopoulos
Tags: consumption/demand, international, IEO (International Energy Outlook), forecasts/projections, Africa,industrial
Source :https://www.eia.gov/todayinenergy/detail.php?id=36853&src=email


No content has been added yet. While we are interested, you can browse the other pages in this order.