To Fight for a Living Planet, Restore its Biology 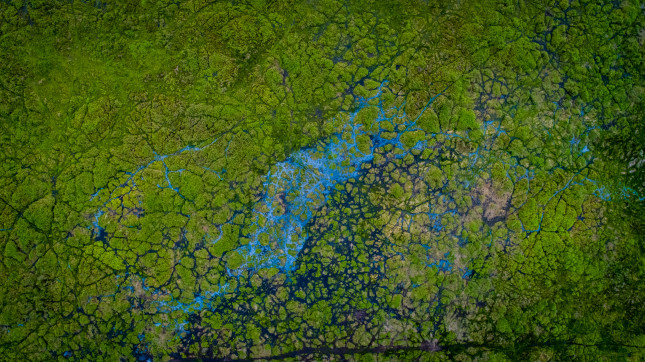 “Uncharted Territory” is a special series hosted by New Security Beat in celebration of the Environmental Change & Security Program’s 25th anniversary. In the series, a diverse group of ECSP partners spotlight emerging trends, innovative research, and new insights at the intersection of environment, health, and security. How we apply the lessons learned from the last 25 years to the decisions that we face today will determine what our world looks like in 2044.

We face the greatest environmental challenges ever relating to climate change, biodiversity, land use, and more. Humans are driving 1 million species to extinction, according to a report by the UN-backed Intergovernmental Science-Policy Platform on Biodiversity and Ecosystem Services. Some $44 trillion of annual global economic product that depend on nature are in jeopardy. Fires have ravaged large swathes of the Amazon—Brazil and Bolivia in particular—and Australia.

Yet little is being done. The climate change Conference of the Parties ended with little agreement on further steps to take. Despite mounting evidence of climate change’s impact and the challenges it poses, government leaders in the United States, Brazil, and Australia seem both myopic and cavalier. They deny that we’re facing a crisis.

In contrast, public awareness and concern have been growing. Extinction Rebellion, a global environmental movement that aims to use nonviolent civil disobedience to compel government to take action, managed to gain visibility. One proponent of fighting for the living planet, the young Swedish girl Greta Thunberg, was an important voice at the United Nations General Assembly and the World Economic Forum. She has called for climate change to be recognized as the emergency it is. “I want you to act as if our house is on fire,” she said at Davos in January 2019. “Because it is.”

While not immediately obvious to most, these issues are all part of one Gordian knot of an environmental crisis. The emissions from fossil fuels are the product of ancient ecosystems. The trapped energy from photosynthesis of eons past is now being released in an instant. The amount of CO2 in the atmosphere from destroyed and degraded terrestrial ecosystems is so large that it is essentially equal to what remains in today’s terrestrial ecosystems. And all that destruction is threatening much biodiversity.

The impacts of climate change on biodiversity are obvious wherever we look. Changes in life cycle timing such as earlier flowering of some plant species, earlier migration and nesting of some bird species, and decoupling events in which two linked species use disparate timing mechanisms such as temperature for one and daylength for another (e.g., the snowshoe hare still in white winter pelage, or fur, in snow-free landscapes). The oceans are more acid because of higher concentrations of atmospheric CO2. As a consequence, species that build shells or skeletons from calcium carbonate find it harder to do so. Ocean acidification has translated into major losses for the oyster industry in the Pacific Northwest.

We know from the fossil record that with greater climate change, ecosystems tend to come apart. Indeed, we are already seeing that in the bleaching events of tropical coral reefs: With higher water temperatures, the underlying partnership between the coral animal and the algae breaks down and the animal ejects the alga pulling the rug out from under the reef ecosystem. The entire ecosystem collapses in what are known as bleaching events yielding lifeless reefs. The tiny pteropods, which are at the base of food chains in the North Atlantic and off the coast of Alaska, have poorly developed shells. The impact of native bark beetles on coniferous forests of North America is another example. Up to 70 percent of the trees are dead in some areas as a consequence of exploding beetle populations because more survive the winter, and an additional generation arrives in the longer summer.

Much of what drives this rush to biotic destruction, which relates to the ecological relationships between living things, and climate degradation is unsustainable development and land use, driven by continuing human population growth and many unsustainable lifestyles. Yet we know from independent analysis that it is perfectly possible to feed all the coming human population without destroying another square meter of nature and releasing its stored carbon. We can achieve this through a combination of 1) increased productivity (avoiding impacts from excessive use of fertilizer); 2) drastically reducing food waste; and 3) adjustments in diets (toward what medical science recommends for health reasons). A lot of infrastructure projects are poorly conceived and certainly would not be economically justifiable if the environmental impacts were factored in.

Nonetheless there are counter trends in energy efficiency, alternate energy, and more efficient resource use. The Chancellor of the Exchequer in the United Kingdom has commissioned a biodiversity equivalent to the Stern Report (which changed how the world looked at the economics of climate change). A gasoline tax underwrites reforestation in Costa Rica’s ecosystem services law. Colombia has followed suit. The president of Colombia convened all Amazon nations’ heads of state in September: They agreed to The Leticia Pact to work toward a more sustainable Amazon future. While we are seeing many encouraging developments, they are not yet adding up to the scale and rate of change that is needed.

Interestingly, one of the most important approaches is still largely overlooked. Namely, nothing is being done to restore the biology of the planet, the biosphere, and therefore to manage the planet as the linked biological and physical system that it is. Such an approach would deliver a triple benefit by 1) conserving all the endangered biodiversity (and all that means for human benefit); 2) restoring ecosystem services (functioning watersheds, pollination, and the like); and drastically lowering atmospheric CO2 levels and associated climate change.

The amount of CO2 in the atmosphere from destroyed terrestrial ecosystems is on the order of 450–500 billion tons of carbon as CO2 and roughly equal to the carbon that remains in intact ecosystems. An ambitious program of ecosystem restoration on a scale to remove one-third of the atmospheric carbon from destroyed nature would reduce CO2 levels from the current 415 ppm to around 350 ppm—a soft landing around the 1.5° Celsius that has been deemed desirable.

That level is not only important to avoid ecosystem disruption but also to prevent disastrous sea level rise. In addition, it would protect a significant amount of currently threatened terrestrial biodiversity. The lowered level of atmospheric CO2 would strongly benefit marine biodiversity by limiting the acidification of the oceans as well as reining in ocean temperature rise, which is already limiting where fish, plankton, and other marine organisms can live.

This ambitious effort to lower atmospheric CO2 levels by restoring ecosystems should be accompanied by a recognition that human aspiration must be embedded in nature. Major efforts to restore lands would also connect remaining fragments of nature. Riparian vegetation, which thrives on a river’s margins and banks, makes a great contribution to nature connectivity with associated benefits in reduced soil erosion and reduced water temperature of watercourses. More generally restored connectivity makes it easier for plant and animals that are seeking their required conditions by moving up in altitude or toward the poles. Embracing nature as a key element of our planet is the path toward a truly sustainable and benign future.

Thomas E. Lovejoy is University Professor of Environmental Science and Policy at George Mason University and Senior Fellow at the United Nations Foundation.