How can we design efficient urban environments to create space for water?

Polypipe has an established market position, spanning the residential, commercial, civils and infrastructure, and public non-housing sectors in the UK and selected markets across the globe.

Increasingly more people live and work in cities, and urban environments grow exponentially. Clearly urban sprawl is causing a strong social transformation and an environmental change for life on Earth. Cities are also at the forefront of our changing climate, as extreme weather phenomena are becoming more and more frequent. In Spain and everywhere in Europe, floods, droughts and high temperatures are combining to create a public health emergency, and it is increasingly understood that offering resilient cities, adapted to the needs of the future, must become a priority of good urban design.

Urban planners and designers face the challenge of integrating the increasingly better known benefits of nature in cities in an effective manner, taking the most advantage of available space. 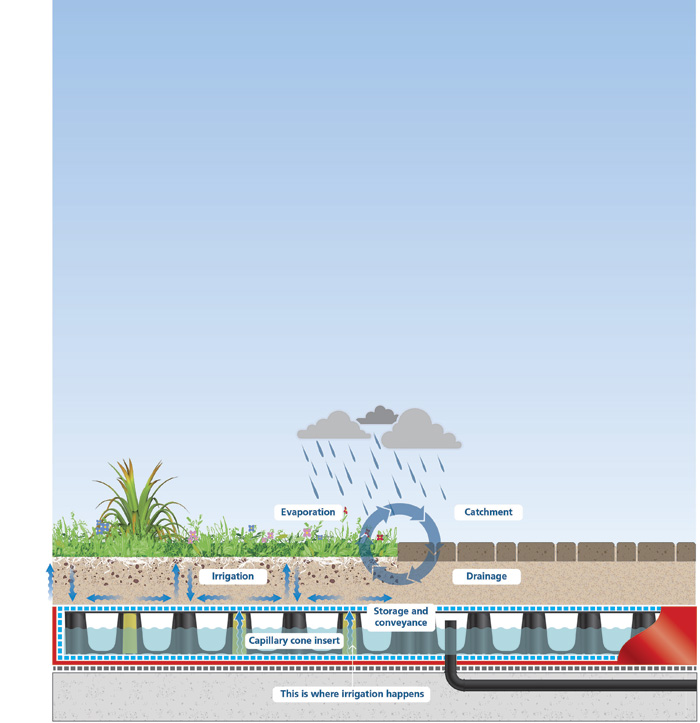 When it rains on a natural landscape, water infiltrates into the soil, evaporates, is absorbed by plants (evapotranspiration) and finally it reaches lakes and rivers. Urban environments make extensive use of hard impermeable surfaces which have a practical function but which interrupt the natural water cycle and increase surface water runoff in our cities to as much as 95% of rainfall. Restoring this natural water cycle is essential if we want to repair our relationship with water.

The approaches used to repair this relationship have been different across Europe. Some cities have established requirements for developers to manage rainfall in situ, often as a condition to have a go-ahead from the planning department. This is generally expressed as an allowable runoff rate in situ, sometimes equivalent to that of a non-urban area, or as the volume of storm water to be stored. Sustainable drainage systems are not well understood, deep detention basins (ponds) which occupy a significant area or large underground tanks that require extensive engineering works have been the result. Basins or tanks are not always appropriate in urban sites where space is at a premium and deep excavation is costly.

Other soft landscaping solutions that could contribute to water management, such as rain gardens or urban trees, have been pulled from projects during cost reduction exercises, where multifaceted benefits have not been communicated effectively or have not been quantified in financial terms. The result is a diverse landscape across Europe, since cities look to balance the impacts of increasing urbanisation and a changing climate with the short term costs of a more sustainable approach to water management.

A new method for water

In the past few years, our understanding of the benefits that nature can contribute to the urban environment has gradually improved. As air pollution, temperature rise and biodiversity decline are identified as the major problems our cities face, we have understood that nature, in its multiple forms, offers a solution. These nature based solutions are evident in 'grey to green' projects all over Europe, where impermeable surfaces (grey) are partially or entirely replaced by plants, flowers and trees (green). Nature based solutions also offer a water management approach in harmony with the natural water cycle. Innovative sustainable drainage systems that mimic nature's response when it captures rainfall have been developed, to collect water and release it slowly into existing infrastructure. The purpose is threefold:

This way we make space for water by creating a shallow reservoir just beneath the surface finish on rooftops, concrete podiums or made ground using a high-strength modular geocellular raft known as Permavoid. The surface finish can be permeable or impermeable, soft or hard landscaped, and can be subject to vehicle loading. The Permavoid system acts to reduce the quantity of water that is transported to the sewer system during storm events, thereby reducing the demand placed on existing infrastructure and making a demonstrable contribution to mitigating flooding. Furthermore, the collected rainfall stored in the shallow reservoir can be used for irrigation by utilising integrated capillary cones to provide passive irrigation. The cones transport water up from the reservoir to the plants above using capillary action, with a wicking geotextile then used to distribute water laterally across the whole subsurface area. This reduces and, in some cases, eliminates the need to use potable water for irrigation purposes. These systems are becoming well established in northern Europe with planners and designers recognising the potential offered by Permavoid to create pleasing sustainable green spaces with the minimum use of potable water. The potential is perhaps greater in southern Europe, where the problems of high urban temperatures and acute water stress are more severe.

As existing cities expand, urban planners and designers all over Europe face difficult questions: How should a city adapt or change to address the effects of climate change? How can we make our cities more resilient to floods and droughts? Is it possible to design urban environments that are in harmony with the natural water cycle?

As cities are more and more water stressed, we should turn to nature for inspiration. Natural environments capture rain where it falls, so it can slowly infiltrate into the soil, where it becomes a vital resource to sustain life. Plants, trees and green spaces turn our cities into beautiful places that filter pollution and cool the air. New technologies that create space for water in urban environments offer practical solutions to turn our cities into better places to live, work and play.

Orlysquare is located next to the Sloterdijk train station in Amsterdam, and it is one of the best examples of 'grey to green' urban reconstruction in Europe. Located on an elevated podium with a surface area of 3,700 m2, the site became a large unused concrete area when the tram and bus stations were relocated. 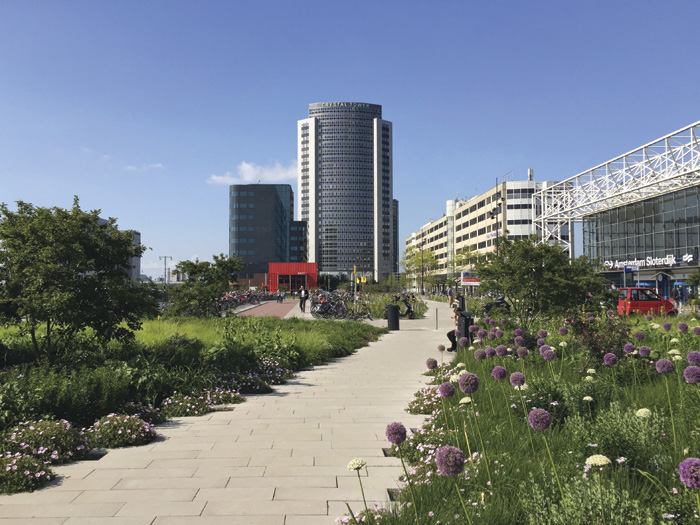 Working with local stakeholders and with Permavoid, the city of Amsterdam transformed the area in a multi-purpose space that includes gardens, bicycle lanes, corridors, bars and restaurants. The design was possible thanks to the Permavoid system, which collects and attenuates storm water below the green surface. Permavoid's capillary cones extract rain water from the subsurface reservoir to the surface using capillary action to provide passive irrigation of plants and trees. Thanks to this technology plants could thrive in soil that was just 25 cm deep, reducing the dead load of the existing concrete podium and providing considerable attenuation of storm water.

Now a sustainable public green space, the Orlysquare regeneration project is credited with increasing civic pride and reducing crime, at the same time as it has a key role in economic regeneration, confirming that blue-green infrastructure is a lot more than a desirable feature. This was acknowledged by the Vereniging Nederlands Cultuurlandschap (Dutch Cultural Landscapes Association), which awarded the project a coveted prize, the Gouden Zwaluw, in June of 2016.